Alliander has a diverse workforce, in terms of competences (we employ many technicians and ICT staff, as well as experts in change management and finance), age, gender and cultural background. We believe that we need diversity to fulfil our mission – reliable, affordable and sustainable energy for everyone – during the challenging energy transition of today. We need to reflect the level of diversity within society, among our customers and in the labour market. Having a policy on diversity and inclusion forms part of our corporate social responsibility.

Alliander aims to be a diverse company, where everyone counts, feels at home and can use their talents to the full. Although energy-related jobs are regarded as typical men’s work, we try to build and maintain a varied workforce because we believe diversity leads to better decision-making and cooperation. Moreover, we think that colleagues must be able to be themselves, irrespective of their gender, age, cultural or ethnic background, religion or sexual orientation. That is why we encourage the recruitment of women in leadership positions, employees with an immigration background and people at a distance from the labour market. In 2018, around 7,450 people worked for Alliander (approximately 6,800 FTEs). This figure comprises all Alliander employees, including contract staff. The majority (80%) are male. There is proportionate representation of different age groups. The percentage of women in leadership positions rose from 24.9% to 28.8% during the year under review. This is Alliander’s highest percentage ever, and an extremely high percentage for a company in the technical sector. We have initiated targeted efforts to increase this percentage further.

Percentage of women in leadership positions

The percentage of women in leadership positions has increased in recent years, from 23.7% in 2014 to 28.8% at year-end 2018. The general trend is upwards, with fluctuations due to changes in the organisation and staffing. This clear upward trend is attributable to the diversity policy pursued by Alliander in recent years. The main key points of this policy are demonstrating exemplary behaviour and explicit support at the top of the organisation, setting specific targets, and ensuring equal opportunities for women in selection procedures.

In view of the success of this policy, it was decided that the deadline for reaching the final target would be brought forward by a year. Our new target is to have women in 33% of leadership positions by 2024 (was 2025).

Alliander seeks to be an employer that appeals to all. To present Alliander to students from a migrant background, we organised a multicultural day in-house and participated in diversity expertise centre ECHO’s mentoring programme during the year under review. We did this with the aim of countering the views and preconceptions we may have in this regard. The theme was placed on the agenda throughout the organisation by means of a campaign, a ‘pigeonhole’ test and an integration dinner. We believe that human contact helps to build better connections with colleagues, suppliers and customers.
Besides our focus on inclusion and diversity in the context of HR and leadership, we also run special networks for employees: Pride (for LGBT employees), Lianne (for women) and Tension (for young employees). These networks are extremely important to employees and to the organisation.

Offering opportunities to people at a distance from the labour market

Alliander believes that people in work feel more engaged with society. This is why we have been helping people at a distance from the labour market to find work since 2009. Our Step2Work programme has given approximately 850 people the opportunity to gain work experience, thus increasing their opportunities on the labour market.
A total of 95 people were offered apprenticeships through Step2Work in 2018. This figure included 25 people who were offered apprenticeships through the I’m Power programme in Amsterdam. During the year under review, we also stepped up our focus on long-term employment for people who come within the scope of the Dutch Participation Act. In 2018, we had more than 32 people in positions coming within the scope of the Dutch Participation Act, including 21 people who were not part of the Step2Work programme.

During the year under review, ten asylum status holders followed a programme at Alliander to obtain a senior secondary vocational education and training qualification in electricity network installation and maintenance. They are being trained as electricians by Alliander and construction group BAM over a period of three years. Their five-month vocational training, which includes a specific focus on the Dutch language, is followed by an eight-month internship at BAM. They start putting their training into practice under the supervision of an experienced electrician. If everything goes well, they then start work as an apprentice electrician at Liander in order to acquire further technical skills. Alliander is the client, while BAM and the relevant municipalities are co-investors in this project. Those who complete the programme are guaranteed a permanent contract at Liander. The Foundation for Refugee Students (UAF) shared its knowledge and experience to help us develop the training programme for this group of asylum status holders. We expect that the first group will obtain their qualifications at the start of 2019. Ten new asylum status holders will be trained as electricians in 2019. Besides the group being trained as electricians, a further eight asylum status holders worked in various divisions of Alliander. If these people are included, a total of 18 of asylum status holders followed a training course in 2018.

The Alliander Foundation encourages and helps our employees to engage in voluntary work. In 2018, 896 volunteers took part in activities and the foundation gave financial support to 80 employee projects. An amount of € 190,000 was spent on these projects and activities. Besides traditional team activities, such as volunteering and social activities with a target group, there is growing interest in activities in which teams put their knowledge to use for a good cause. Alliander is proud that the Foundation supports employee volunteering. The object of the Alliander Foundation is to encourage employees to make a charitable contribution to society in their spare time. In turn, the employees experience benefits such as an opportunity to broaden their horizons. The emphasis in the voluntary work is on independent organisation and on involving other colleagues in the initiative. In 2018, Alliander’s Management Board decided to support the Alliander Foundation for a further period of five years (from 2019 up to and including 2023).

The transparency of compensation ratios within organisations is the subject of global debate. Alliander aims to report openly on this issue. The total income of the CEO is 3.7 times the median salary of all Alliander employees in the Netherlands. This is lower than the average for the 1,000 largest companies in the Netherlands. 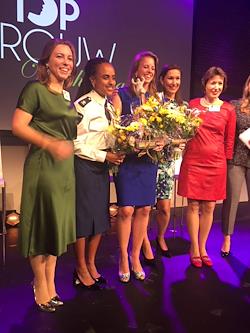 Sarike van Wette, Strategy & Environment Manager, was the winner of the Young Talent Award 2018. The judges: “Sarike is a role model for young talent. She’s able to win over people from all walks of life, and stays positive no matter what she has to deal with. She earns people’s trust and is extremely dynamic.” The Young Talent Award, which is presented by the foundation Stichting Topvrouwen, is intended to encourage talented, upwardly mobile young women. The aim of the foundation is to provide a platform where talented women at Dutch organisations receive attention, are visible and are therefore able to act as role models.