Thanks to our financial position, we are able to continue to invest in our networks and grow the business. This enables us to pursue our strategy and play a facilitating role in the energy transition. Our financial policy is designed to allow us to maintain a solid A rating. There is evidence that sustainability considerations are an important part of the deliberations of shareholders and other investors alongside sound financial policy. Alliander supports the significance of sustainability and so the company’s sustainability targets play a prominent role in the management of the business and external financing. Our efforts are being rewarded, as shown by the B+ sustainability classification awarded by the rating agency, Oekom, which is the highest rating in our sector.

Alliander’s financial framework is formed by the FFO/net debt, interest cover, net debt/net debt plus equity and solvency ratios. These ratios, coupled with the norms against which they are measured, are crucial in obtaining and retaining a solid A rating profile on a stand-alone basis. In a departure from IFRS, when calculating the ratios, the subordinated perpetual bond loan issued in 2013 is treated as 50% equity and 50% debt.

As at 31 December 2017, the FFO/net debt ratio amounted to 27.4% (year-end 2016: 26.6%) The increase is mainly accounted for by a relatively greater increase in operating profit compared with net debt.

As at 31 December 2017, the interest cover ratio worked out at 10.2 (year-end 2016: 8.3). The increase is mainly accounted for by lower interest expense and an increase in the operating profit. Alliander’s financial policy stipulates that this ratio should be a minimum of 3.5.

The solvency ratio as at 31 December 2017 amounted to 56.7% (year-end 2016: 58.5%), compared with a minimum of 30%. The fall compared with 2016 is mainly due to an increase in total assets as a result of capital expenditure on the networks and a relatively smaller increase in equity.

Alliander makes a major contribution to welfare in the Netherlands. There is a considerable indirect impact on the Dutch economy from the transmission of energy and on welfare experienced through the permanent availability of energy. We explain this in our impact model. We have a direct impact through the value of income for our stakeholders and through earnings, salaries and fees, donations and other investment in society. This is set out in note 24 of the Financial Statements. The dividend distributed to shareholders and payments to providers of capital and government authorities make an indirect contribution to social goals. The way these items are allocated and used is set out below.

Alliander pursues an active policy of maintaining an open and constructive dialogue with shareholders, bondholders, financial institutions, credit rating agencies, sustainability rating agencies, analysts and the media. We try to provide all stakeholders with relevant financial, sustainability-related and other information as accurately and promptly as possible, in reports, in press releases and in meetings as well as by other means.

All of Alliander’s shares are held directly or indirectly by Dutch provincial and municipal authorities. A full list of the shareholders can be found on www.alliander.com. The authorised share capital of Alliander N.V. is divided into 350 million shares with a nominal value of €5 each. All the shares are registered shares. As at 31 December 2017, there were 136,794,964 issued and paid-up shares. Contact with shareholders primarily takes place in shareholders’ meetings. However, Alliander also believes that it is important to have contacts between the company and its shareholders outside of the shareholders’ meetings, on a bilateral basis or in a wider forum. A summary of the various shareholder dialogue structures can be found on the Alliander website.

Institutional investors in our bond issues, such as asset managers, insurance companies, pension funds and banks, provide a large part of our financing in the form of debt. These are mostly Europe-based professional players on the international financial markets. We keep existing and potential bondholders informed regarding the company’s financial position and results as well as developments in the industry by actively engaging in investor relations activities in addition to complying with ordinary publication requirements. In this context, in March 2017 we met investors in Amsterdam, Frankfurt, Paris and London to discuss the 2016 figures. In September 2017, we held a conference call on the half-year figures. On both occasions, we addressed a range of subjects including the method decisions and regulated WACC for the new regulatory period, consolidation in the sector, the challenges that Alliander faces from the energy transition, the impact on Alliander of the exchange of networks between Alliander and Enexis and the consequences of the Senate’s rejection of the Electricity and Gas Bill (STROOM).

As had been agreed, a report on the use of the funds from the Green Bond issue in April 2016 was issued in March 2017. The Green Bond Report included additional information on the projects financed and the effect of this investment on reducing CO2 emissions. The report is available on our website, see: Green Bond Report 2017.

On 29 January 2018, Alliander announced its intention to issue a new perpetual subordinated bond. At the same time, a tender was issued for all €500 million of perpetual bonds in the 2013 issue, subject to the successful issue of the new loan. To this end, on 30 January, €500 million of new perpetual subordinated bonds were issued at a coupon rate of 1.625% at an issue price of 99.144%. At the end of the tender period on 5 February, investors holding a total of some €413 million of bonds from the 2013 issue had registered for repurchase by Alliander. In accordance with the loan terms and conditions, the remaining €87 million of bonds outstanding will be redeemed at 100% of face value by exercising the first right of redemption on 27 November 2018. In accordance with Alliander’s financial policy, the new bonds will be regarded as 50% equity for calculating financial ratios. The outstanding bonds from the 2013 issue will be counted as 100% debt for rating purposes with effect from 30 January. The current recognition as equity will be continued under IFRS.

The repayment schedule for the interest-bearing debt as at year-end 2017 was as follows:

The amounts scheduled for repayment in 2019, 2022, 2024 and 2026 mainly relate to the bond loans. The repayment in 2018 relates to the ECP and other amounts to the repayment of shareholder loans and other loans. Alliander has a €3 billion EMTN programme. As at 31 December 2017, the carrying amount of the outstanding bonds was €1,395 million (nominal value €1,400 million). Alliander has available an ECP programme totalling €1,500 million which can be used to issue short-term debt instruments. As at year-end 2017, ECP loans with a face value of €225 million were outstanding. Amounts drawn in currencies other than the euro are fully hedged.

In July 2017, Alliander renewed its existing committed €600 million back-up credit facility for one year. The facility now runs to July 2022. There is an option in 2018 to renew the facility by one year to July 2023 at the latest. The facility has been entered into with six banks. As in previous years, this facility was not drawn on during the year.

In July 2017, Alliander entered into a loan with the European Investment Bank on favourable terms. The loan is for €300 million and will be drawn in three tranches. The first tranche of €75 million was drawn in September 2017 and the remaining €225 million will be drawn in two tranches during 2018. The loan has to be repaid in full in 2031.

In order to retain ready access to the capital and money markets, it is important for existing and potential financiers to have an accurate picture of Alliander’s creditworthiness. Alliander uses credit ratings for this. Having a credit rating is also an obligation under the terms of the cross-border lease contracts entered into at the end of the 1990s by Alliander’s legal predecessors. Alliander has credit ratings from S&P and Moody’s. These ratings comprise a long-term rating with an outlook, and a short-term rating. The outlook is an indication of the expected change in the long-term rating over the next few years. S&P and Moody’s have kept both ratings and outlook unchanged. The credit ratings as at year-end 2017 were as follows:

During the reporting period, Alliander was in contact with the rating agencies on several occasions. These contacts covered such things as the regulatory system, the exchange of networks with Enexis and the transition from gas to district heating.

Based on the recent financial performance and forecast figures for Alliander presented on these occasions, S&P reassessed Alliander’s creditworthiness and confirmed the existing ratings and outlook. Moody’s is expected to issue an update in the first quarter of 2018.

Leiden is working hard on its heating policy vision 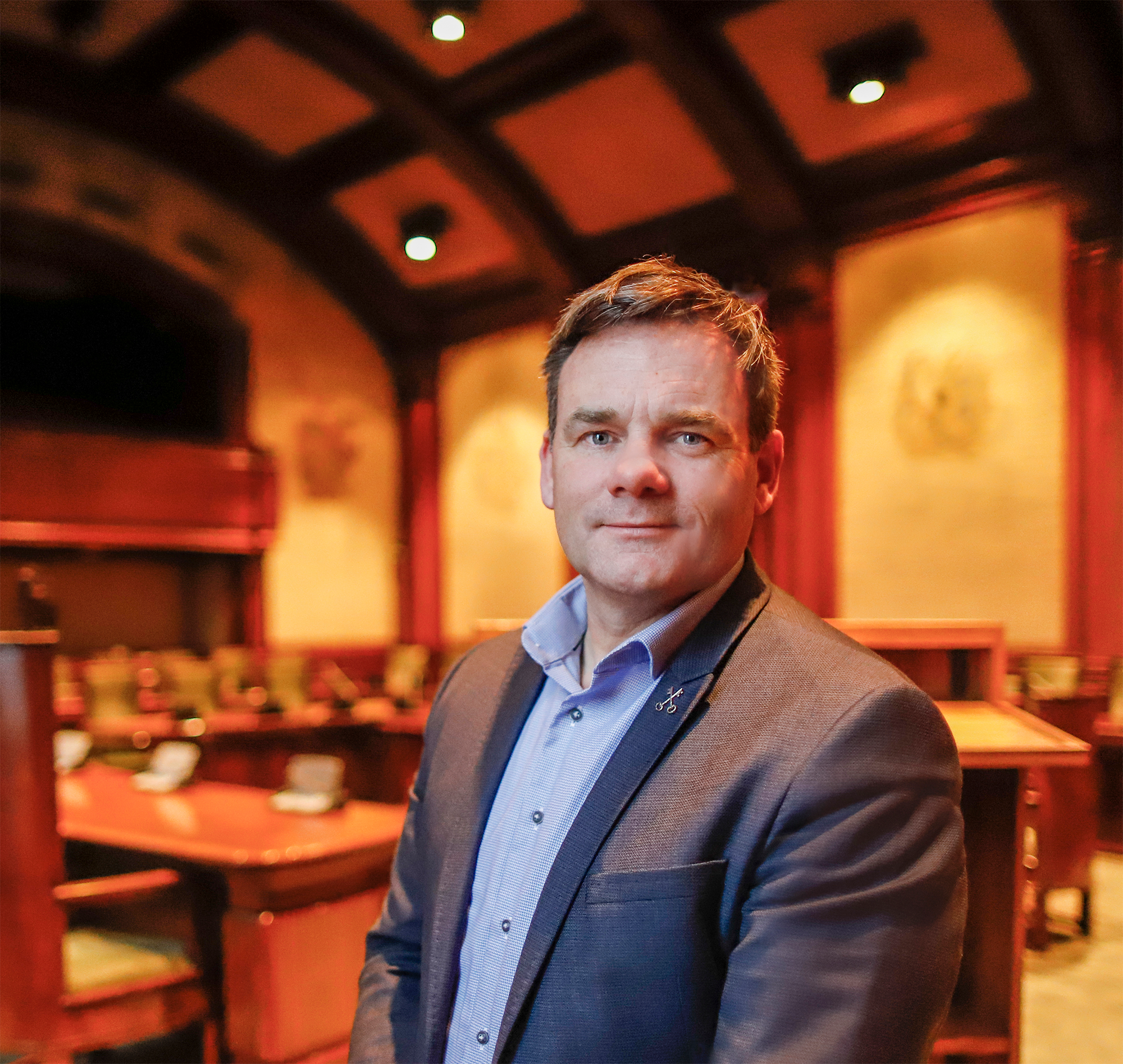 The municipality of Leiden, one of Alliander’s shareholders, regards the energy transition as one of the greatest challenges of the next few years. Alderman Paul Dirkse (Education, Sport and Sustainability) explains.

“At the end of 2015, the council adopted an ambitious sustainability programme with a key role for energy. We have, for example, a city-wide network of neighbourhood ambassadors who offer accessible advice to people who want to make their homes energy-efficient. Leiden has also entered into the School Building Sustainability Green Deal with school managers and since 2017 we have purchased wind energy generated in the Netherlands for the municipal organisation. An ambitious energy accord was recently entered into with the region and in November 2017 the council was one of the first municipalities in the Netherlands to adopt a heating policy outlook for making urban district heating more sustainable.

Working together from the start is vital for a successful energy transition. We have to and want to have the courage to be specific. A good example is the letter of intent on making Leiden Zuidwest gas-free in 2035. By 2035, this district will no longer be using natural gas for cooking, showering or domestic heating. A broad group of stakeholders, including Liander and AllianderDGO, are working towards this goal. There is still much uncertainly but fortunately this does not mean that everyone is taking a ‘wait and see’ attitude and Alliander’s facilitation role is very useful. Both Liander and AllianderDGO have played a major role in creating the Leiden Heating Policy Outlook, for example by sharing information on the age of the gas mains and by being very involved in implementation. The municipality of Leiden also wants to progress this useful alliance.”

The Management Board has determined, with the approval of the Supervisory Board, to add €111.8 million of the profit to the other reserves. The remaining profit of €91.5 million is at the disposal of the General Meeting of Shareholders. This equates to 45% of profit after tax, excluding non-cash incidental items in the 2017 financial year.