The subject of taxation has received increasing publicity in recent years, with the fair share of tax paid by companies attracting public interest  in particular, so what is Alliander's tax strategy?

Alliander is very careful to discharge all its tax liabilities and obligations with respect to subsidies, having due regard to and in view of its involvement in society. Based partly on the dialogue with both our internal and our external stakeholders, the following mission has been at the centre of all our activities relating to tax and subsidies since 2009:

"We aim to be a committed and reliable taxpaying company that is proud of making a fair contribution to society through the tax which it pays."

To this end we have set ourselves a number of goals that we strive to achieve each and every day:

As a taxpaying company, Alliander is liable for various taxes, chief among which are corporate income tax, wage taks and VAT. The following chart outlines the main cash flows. 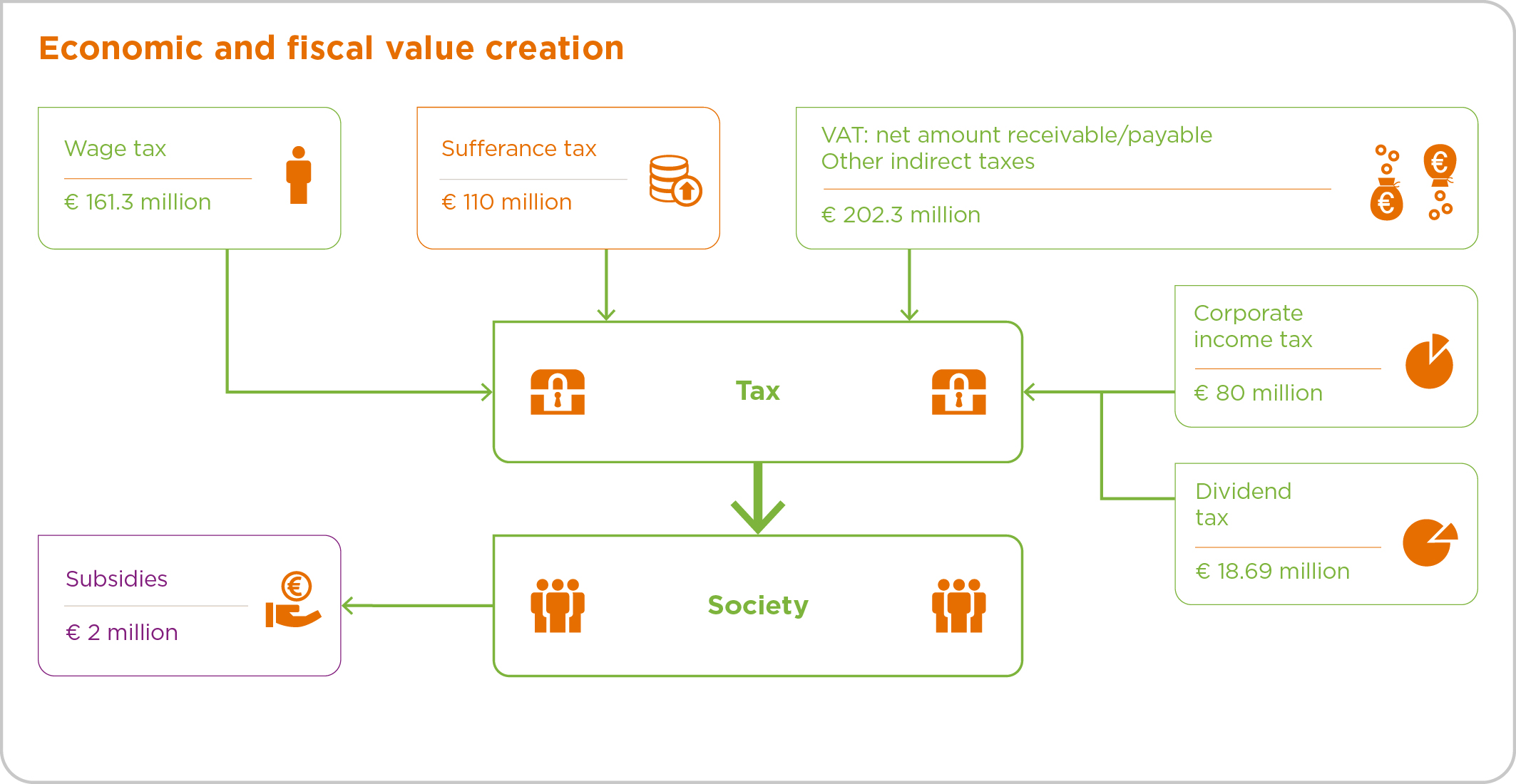 Alliander is conscious of tax-related risks. We are always careful to act within the bounds of primary and secondary legislation and to observe the spirit and the intention of the law. The primary objective of our conduct in relation to tax matters will generally reflect Alliander's involvement in society and will support the company's operational activities rather than being driven solely by tax implications. This is in line with the Enforcement Covenant under the Horizontal Monitoring (i.e. company self-assessment) arrangements agreed with the Dutch Tax & Customs Administration at the end of 2008. Against this background, Alliander strives to reach a prior ruling on potential tax risks by pursuing a constructive and transparent dialogue with the tax authorities. The implementation of our tax strategy also adheres to Alliander's risk management model. In this context, the Tax Control Framework is also used as a risk mitigating measure.

The effective tax burden1 in 2015 was 25.1% (2014: 22.4%). This represents an increase on the standard rate, compared with the preceding year. This is the combined effect of not recognising the loss reported by Alliander AG (increasing effect), utilising tax breaks available for capital projects (decreasing effect) and expenses that are disallowed for tax purposes (increasing effect). In calculating the tax burden, Alliander works on the principle of country-by-country reporting. Taxes are paid in the country where the activities are carried on. In the case of Alliander, nearly all the tax is paid in the Netherlands. For the 2015 reporting period, this was an amount of €80 million in direct taxation.

Additionally, in November 2010, Alliander issued a subordinated perpetual bond loan with a nominal value of €500 million. In the closing two months of 2013, this subordinated perpetual bond loan was redeemed. Under IFRS, an instrument of this kind qualifies as equity. It was assumed that the periodical payments made to the holders of the bonds issued in 2010 would count as deductible expenses for the purposes of corporate income tax. To date no agreement has been reached with the Dutch Tax & Customs Administration concerning the tax treatment of these loans and an appeal is ongoing. The maximum exposure for Alliander is between €20 million and €30 million. Having consulted external experts, the Management Board decided not to recognise a provision in this respect.

As a large corporation we also have a responsible approach when it comes to subsidy schemes. We do a lot of innovative work, especially in the context of the energy transition. Various schemes are available for this kind of activity, at international level, at national level and at regional level. We focus on grants that are intended for large corporations rather than those for regional activities. We recognise our responsibility in this area and, at regional level, deliberately leave the field open for other companies to develop smaller sustainability initiatives by only applying for such grants where appropriate.

At group level, Alliander has built up a robust and socially responsible tax policy in recent years. However, developments in the energy market (including greater internationalisation) make tax matters increasingly complex. Our aim is to maintain the existing status with respect to compliance and to have a stable effective tax burden. Paying our fair share – in the way we attempt to do in conjunction with our stakeholders – remains at the heart of our tax policy.